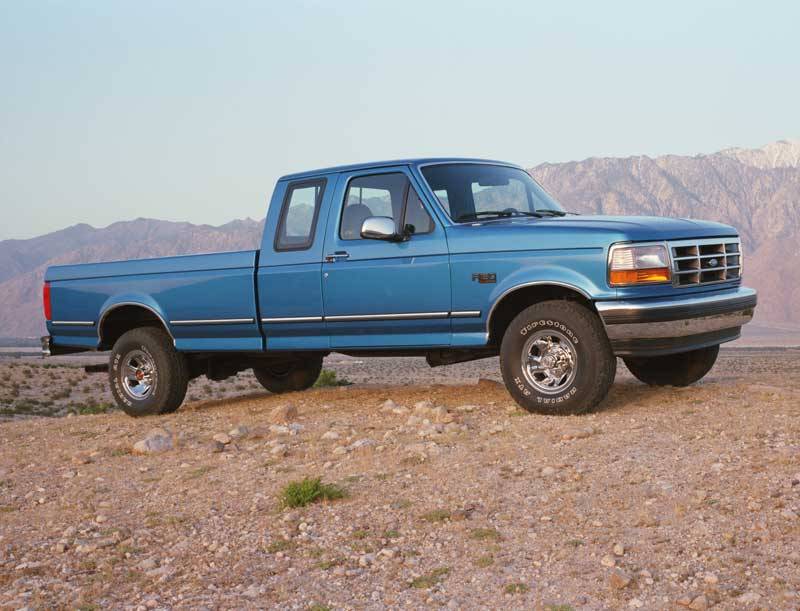 The 1994 Ford F-150 came into our lives after our 1993 Ford Ranger finally succumbed to the rough treatment and minimal maintenance it got over many years of use. My then-husband had a very specific idea of what he wanted out of his new truck (yes, it had to be a truck, none of this “car” talk). He wanted a five-speed standard transmission, a half-ton or larger pickup truck, bench seats in the back for a car seat (I was five months pregnant at the time), and of course it had to be a Ford — or Dodge, if that’s the best he could find.

One day on the way to work we spotted a blue F-150 sitting out in a field by the highway with a “For Sale” sign in the window. The truck immediately caught my then-husband’s attention, but we were running late and had to get the remaining ten miles to work quickly.

He hadn’t forgotten about the truck by lunch hour, so we spent the entire break driving the ten miles back to the field. First thing we saw was the $6,200 posted in the window – a fair price for a 1994 in good shape in 2005. A glance inside told us that this extended cab did indeed have bench seats. When he saw that it was a five-speed, he informed me we would be purchasing this vehicle. The next day we sealed the deal, got financing, and drove it home.

The guy who sold us the truck had used it mainly for running around on his family’s dairy farm and for pulling a horse trailer. He put a new transmission in it at 123,000 miles. Apparently the old one still worked, he just didn’t like the WAY it worked. We bought it with 125,000 miles on it because the previous owner was headed to college and needed better gas mileage.

This Ford F-150 has nice bench seats in front and back, with an adjustable front seat. The only thing I didn’t like about the front seat is that one has to move the entire seat forward — driver and passenger — in order to adjust it for the driver. It’s pretty typical for these pickup trucks, but it is a pain in the rear. I am 5’6”, and was married to a man who stood 6’ tall and weighed 480 pounds. We took up slightly different amounts of space.
As you might expect, the back seat is pretty cramped; there’s just enough room for an average-sized woman’s legs to squeeze between the seats. Turns out, the back seat is just a little too small for a rear-facing car seat, so baby had to ride in front with us until he could go to a front-facing seat. Though the airbags were turned off, I was still uncomfortable with him riding in the front. The front-facing seat fits, though it’d be a lot easier to get it to sit stable if the seat were about an inch wider. It’s also a pain to get the seat through the door, but what can you expect? It’s not exactly designed to be a family vehicle.

This pickup is almost identical to the one reviewed here. Take a look at the video for a better idea of how the interior and engine compartment looks.

One thing that really stuck me about this particular pickup is how smooth it runs. Most of my vehicles have been fairly old so I don’t have a lot for comparison, but the 1994 F-150 drives beautifully and you can’t really feel the road at all. As for turning, this pickup can’t do U-turns on most roads – it has a long box and extended cab.

Not long after buying the 1994 Ford F-150, my then-husband wanted a camper. What’s the use of a pickup like this without something to pull? So we got a 20’ camper. Even when it’s pulling the camper and all our camping gear, the pickup does an excellent job going up and down a 12% grade and switchbacks in the Big Horn Mountains of Wyoming.

We stopped over for the night on top of the mountain, and with said camper unhitched went for a nice scenic drive on a couple four-wheel trails. We ended up having to lock the hubs in near the top (good old Ford locking hubs…just turn the knob on the hub from “free” to “lock”, jump back in and keep going), but other than that the truck had sufficient power and clearance to make it up a trail that climbed so steeply in places that I couldn’t see the anything but sky out of the windshield (this from the passenger’s seat, I’m sure if I’d sat forward I would have seen a little bit of ground, but not much).

About the only negative thing, and something to be expected with a half-ton pickup, is the gas mileage. This pickup gets about 17 miles to the gallon on the highway unloaded, and about 7 with the camper.

The farthest we’ve ever taken the pickup was a three-hour drive to pick up the camper, then turning around for another hour before reaching our campsite. The seats stayed plenty comfortable the whole time, except that I couldn’t recline for a nap (yes, I’ve been spoiled by my cars).

In my mind, the truck finally proved its worth last winter when a three-foot snow fell (accumulating at the rate of one inch every ten minutes). All our friends drive cars, smaller pickups, and two-wheel drives — not a particularly smart choice in Wyoming). They were all stuck, not to mention many, many people in town got stuck throughout the following two days. Most of them didn’t even make it half a block from their homes, even those with four-wheel drive but less clearance. We spent all day pulling people back home, taking friends to and from work, and even breaking a two-mile path back into town for a friend’s two-wheel-drive pickup. It may get worse gas mileage than all those vehicles, but it proved it would still muscle its way through when just about every other vehicle came to a standstill.

This pickup stayed in the family for about 4 years, ending up with about 250,000 miles on it. The only real problem came in the form of a destroyed clutch, which could be driver error. Cost for a professional mechanic to replace it was about $650. Still, considering the age and high miles on the pickup, it’s a small price to pay for years of hard work.

In short, this is a good pickup for lighter pulling jobs, comfortable enough for traveling cross-country, and a true workhorse in bad driving conditions, though it may take a chunk out of your gas budget.

Disclaimer: I am not affiliated with Ford or anyone who profits from the sale of Ford vehicles. No incentives were attached to the creation of this review; the experiences and opinions expressed here are entirely my own.