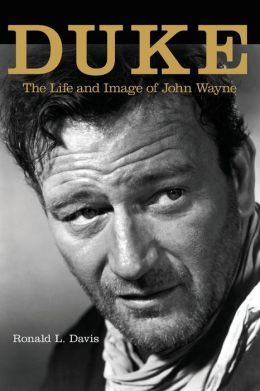 Duke: The Life and Image of John Wayne, by Ronald L Davis

John Wayne is an American icon — arguably, he’s the most recognizable figure in the entire history of Western cinema. The popular image of John Wayne is that of the swaggering, hard-drinking “man’s man,” always sure of himself and ready to plunge headlong into any good fight. This man is driven by a basic set of beliefs in honor, justice and right. Wayne’s trademark gravelly voice and slow drawl still induce images of what the foundation of the country ought to have been. In Duke: The Life and Image of John Wayne, author Ronald L. Davis seeks to reach beyond this indelible image of John Wayne the character, and look into who the man really was away from the movie set and rolling cameras.

Who was John Wayne?

John Wayne was born Marion Morrison, the elder son of a family with two boys, a weakling father and an over-domineering mother. At least, this is how Morrison himself describes his early childhood. Constantly teased and bullied for having a girl’s name, he started using the dog’s name as his nickname instead, by which he’d be known by friends and acquaintances for the rest of his life—Duke. He became a football star in high school, and later went on to become a superstar in television, leading a successful career and having intelligent children of whom he was very proud.

All of the above is what everyone knows about John Wayne, or at least anyone who knows even the most basic things about his life—his primary early setbacks, followed by his triumphs. It doesn’t mention his persistent and excessive drinking, his nagging insecurities, his estrangement from his children, his failing health or his three failed marriages. Nor does it mention that he worked like a madman for most of his life in thankless two-bit films that did little more than pay the bills. These things aren’t often attached to John Wayne the heroic icon, but they are the elements that made him human.

Throughout the book, Davis seeks to bring out these quirks and challenges that accentuate John Wayne’s humanity. From his descriptions, anyone reading might understand that these details are ones that terrified the real John Wayne, leaving him in fear that others would not love him and would see him as weak. While such details may seem tiresome in some biographies, they are an essential part of this one, as the subject has so often been de-humanized as he’s been made more into an epic mythological figure than a man.

The one annoying point of this book is that Ronald Davis goes through a rather exhaustive list of John Wayne’s roles, describing the conditions and events on each of those sets. While many of the lesser-known titles are not mentioned, it’s still a bit cumbersome for a man who played nearly 200 different roles throughout his life.

Overall impressions of Duke: The Life and Image of John Wayne

It is very obvious in some parts of the book that the retelling has been heavily edited or abridged, presumably by John Wayne’s surviving family, who had a very active role in approving the book for publication. The result is that some subjects, such as around John Wayne’s drinking habits or his temper, seem apologetic or like they are justifying the behavior. While such apologies come up fairly often, they do not greatly detract from the book. They do make the delivery a little choppy, but otherwise allow the reader to draw his or her own conclusions about the content.

Overall, this is an excellent book for anyone who has an interest in John Wayne and/or his movies. If you who simply enjoy biographies but not necessarily John Wayne, you may derive a little bit less enjoyment from this one. Its fascination lies primarily in the way perceptions of John Wayne morph throughout the telling of the tale, and can be pretty dull for anyone who doesn’t already have a knowledge base about the movies, or about how the man is popularly perceived.

Disclaimer: I am not affiliated with the author, publisher, marketers, or anyone else associated with this book. I did not receive compensation for my review from anyone linked to the book, and the opinions expressed here are my own. This review was originally posted on Epinions — I retain all rights to the review despite Epinions’ continuing to display reviews without compensation to their authors.